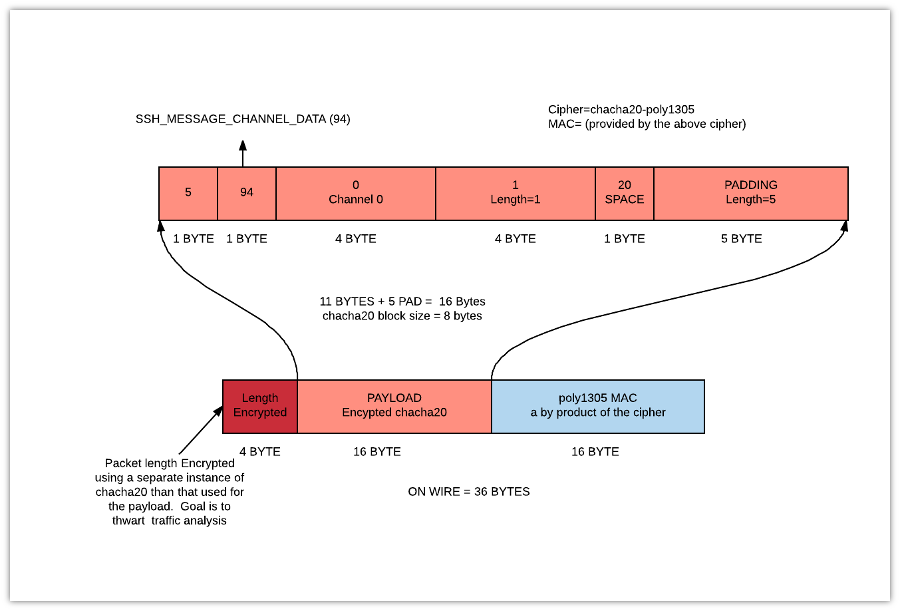 Secure Shell (SSH) is a ubiquitous protocol used everywhere for logins, file transfers, and to execute remote commands. In this article, we are looking to use passive traffic analysis to detect various SSH events like login, keypress, and presence of SSH tunnels. Lets start with a question.

What do you see on the wire when you press a key in a SSH terminal?

You could observe anywhere between 28 and 96 bytes of SSH payload depending on the type of secure channel negotiated. Lets dive a little deeper to see if we can get a accurate answer.

TLDR Use traffic analysis to detect successful login , keystrokes, and Tunnels – reverse and forward. The approach is to use knowledge of the ciphers and MAC used in SSH and calculate the SSH message lengths on the wire. For login detection, we use the Terminal Capabilties Exchange , there are only a handful of terminal types so the message is predictable.

The basics : MACs and Ciphers

The SSH protocol offers both encryption and message integrity. Each packet is encrypted using a Cipher and authenticated using a MAC. If you capture packets using a tool like Wireshark, this is what a SSH record would look like. (without the TCP/IP headers)

The general flow of the SSH protocol is

Ciphers are used to encrypt your payload. Type ssh -Q cipher to get a list of supported ciphers by your client. You would see something like below. The comments are added by me

ETM vs non-ETM MACs — ETM stands for “Encrypt then MAC”. This represents a break from the older SSH which used “MAC then Encrypt”. Whether SSH negotiates an ETM or non-ETM MAC has a rather big implication for our traffic analysis.

The cryptographic doom principle and the SSH -etm MACs

The older non-ETM MACs like hmac-md5 first computed the MAC on the unencrypted SSH payload and then encrypted the message. This was MAC then Encrypt. I am not an expert on this and I can only guess why the initial SSH developers did this. The reason might have been to encrypt the packet length to thwart traffic analysis. Even today when you use hmac-sha2-256 you have to first decrypt the packet and then get the packet length. This means that you have to run a decryption operation on an unverified message.

Touching an unverified message is frowned upon by crypto experts

“if you have to perform any cryptographic operation before verifying the MAC on a message you’ve received, it will somehow inevitably lead to doom.” — Moxie Marlinspike

OpenSSH now defaults to the *-etm ciphers. These first encrypt the payload then apply the MAC. The flip side is that now you need to transmit the packet length in the clear. Why? Because the receiver needs to check the MAC first before decryption. To do this you need to know the total length of the packet so you can find the MAC ! This exposes the protocol to traffic analysis but avoids the ‘moxie crypto doom principle’.

A single keystroke on the wire

Getting back to the traffic analysis of a single keystroke. We have the following so far

So lets jump in and see how this looks on the wire with a concrete example.

Say you hit a Space Character ASCII 32 (Hex 20) in a SSH session that has negotiated an aes128-ctr cipher. Per the SSH protocol RFC 4253 the encapsulation for carrying this single byte is the structure SSH_MSG_CHANNEL_DATA

and the string datatype is a 4-byte length followed by the raw string data. The full encapsulation would then look like this

Lets say we use HMAC-SHA1 (20 bytes) as the MAC algorithm. These 10 bytes when seen on the wire can be 40 or 52 bytes depending on whether the ETM mode is used or not.

So, we cant just pad 1 byte, we must now add 17 bytes of padding to bring it up to 32 bytes which is the next multiple of the cipher block size. The full packet looks like below.

Again note that the packet length itself is encrypted. This thwarts passive reconstruction of SSH PDU (Messages) from a TCP byte stream. This is more resistant to traffic analysis but it breaks the Moxie Cryptographic Doom Principle by forcing the receiver to do a decrypt operation on unverified message. Thats where the ETM MACs come in.

Now you need to add 5 bytes of padding to bring the total message up to the AES128-CTR cipher block length of 16. The good news here is that 5 bytes of padding is more than the mandated minimum of 4 bytes. The total length on the wire is 40 bytes as shown below

Here the packet length is unencypted. This allows traffic analysis tools like Trisul to reconstruct the SSH PDUs from a TCP byte stream.

This particular cipher is currently zooming in popularity due to Chrome’s adoption. It is an AEAD cipher that is apparently computationally very efficient and it is as secure as AES. It is also the default cipher for SSH in latest versions of Ubuntu when I checked. ChaCha20-Poly1305 is worth a closer look because OpenSSH treats this cipher differently.

On the wire ChaCha20 is exactly like the ETM case, the packet length is not part of the encrypted message. The message is :

Now the block size of ChaCha20-Poly1305 is 8 bytes – so you need 5 bytes of padding to bring it up to 16 bytes. To that, add the 16 byte AEAD token created by Poly1305. You end up with total message size of 36 bytes. At this point the OpenSSH implementation adds a twist.

The chacha20 packet length field is also encrypted. They use a separate instance of ChaCha20 for this. I suppose this doesnt break the aforementioned “Moxie Doom” principle because the length isnt authenticated. It seems to me like the only reason OpenSSH does this is to thwart traffic analysis. The other AEAD ciphers AES-128-GCM do not encrypt the packet length. This how a single keystroke on a ChaCha20-Poly1305 SSH session looks like on the wire.

A naive way to detect a successful login is to alert when a total traffic exchanged on a SSH flow is greater than a threshold value. We currently use that with Trisul and the results are hit and miss. Few factors that can confuse us:

Turns out there is a much better way to detect login. After a successful password or key authentication, the client does two things in succession

It turns out there arent that many different types of terminals so these two messages are mostly of fixed length.

The second channel request message for “shell” is

This is 16 bytes when login sessions ask for shell

For *etm MACs, the packet lengths are directly transmitted, since 312 bytes are padded to 320 (multiple of 16) you look for 320 bytes.

For chacha20 and the non-ETM MACs the packet lengths are encrypted. So you have to look for TCP reassembled chunks that match the TERMCAP and SHELL since they are typicaly sent together.

In a similar manner you can construct a table for each of the ciphers and MACs. See ssh_dissect.lua on our Github page.

As we saw a single keystroke results in 10 byte payload, which can be easily translated to on-wire lengths

This was the real motivation for me looking at this protocol in detail. SSH Tunnels are completely opaque to systems like Trisul/Bro/Suricata which look at packets. If a hostile element manages to establish an autossh reverse tunnel out of your network, you are really pWnd. He can come and go deep into your network at will, no firewall or IDS, IPS will detect that.

We had an earlier implementation mentioned in this blog Detecting Reverse SSH Tunnels that used a range of packet lengths to detect a tunnel. It was a reasonable approach but a lot would have slipped through because we didnt explictly track the MACs and Ciphers.

With SSH Tunnels there are two sessions.

Example of a single keystroke inside a SSH Tunnel. We have seen that a single keystroke in a SSH session using chacha20-poly1305 is 36 bytes. Now imagine that this is now carried inside a SSH tunnel that is also using chacha20-poly1305. How does one calculate the packet length? A single keystroke on a chacha20 SSH session that is run over a chacha20 tunnel is 76 bytes. The computation is quite simple if you followed the previous examples. Here is how that looks. Notice that ALL the traffic from the tunnel is carried inside a Channel 1 wrapped by the MSG_CHANNEL_DATA.

Once we got this far, we apply the same techniques to calculate a lookup table. See ssh_dissect.lua

Programming detection into your tool

Given the unmistakable move towards total encryption, traffic analysis techniques are going to become more important for “network security monitoring” platforms. Recently Damien Miller , an OpenSSH committer blogged about how thwarting traffic analysis was a high priority in his article ChaCha20 and Poly1305 in OpenSSH

Programming this in your tool of choice would include :

How can SSH developers really thwart traffic analysis? Here are a couple of ideas from the top of my head

Trisul 6.0 ! Ready to go packages for Ubuntu and CentOS.