How to setup Trisul Hub and Probe in a High Availability configuration. This guide describes how a backup probe and hub can be setup to take over in case of a primary failure.

You need an identically sized backup installation of Trisul that can takeover the load in the event of a primary failure. 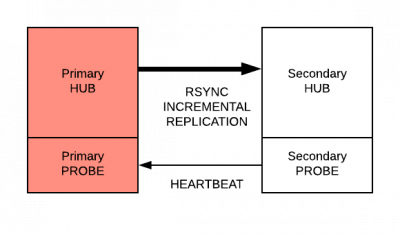 Configure SSH between the primary and backup nodes

On both the primary and backup node use ssh_copy_id to allow login without an interactive password.

The primary hub and probe nodes contains the database and configuration. We use a script based on RSYNC to replicate this database incrementally over to the backup node.

On the primary node

The backup node needs to keep checking the liveness of the primary node using a heartbeat.

On the backup node

The keepalive uses a PING to check the reachability of the primary node. When a configured number of PINGs (default 6 PING failures) fail, the backup starts the Trisul HUB ad PROBE processes and this takes over the primary function.