QUIC (Quick UDP Internet Connection) is a protocol championed by Google to speed up web services by replacing the traditional TCP/HTTP network layer with a new UDP based protocol. QUIC is almost exclusively used by Google services right now like YouTube, but there is an IETF Internet Draft on it now 1) . The movement is to merge HTTP semantics on the UDP based QUIC and call the new thing HTTP/3. As of today the only QUIC services found in the wild are from the Google stable.

This article describes how you can pull out key indicators from QUIC into Trisul using the Lua Scripting API.

In the NSM2) worldview, we would like to collect as much as possible about the QUIC sessions. This would be in addition to Flow records and PCAP we collect for all flows.

We were seeing quite a bit of QUIC traffic to YouTube in one of our probes, so we went ahead and got the PCAPs and started analyzing them using Wireshark and the Google QUIC Crypto 3) document to see what can be extracted. We found the following indicators

Then it is a matter of using the open source BITMAUL LUA Protocol Dissection library to do the heavy lifting. In about 150 lines of code, we have a working QUIC dissector.

The ''quic-dissect.lua'' script is where the real stuff happens, the rest of the files are plumbing into the Trisul platform. Start from there.

Output of the QUIC analysis

The goal of all Trisul scripts is to add some piece of information into the streaming analysis. What we do in quic-simplecounter.lua is.

Click to zoom the image, you can see the QUIC flows tagged with QUIC, ConnectionID, Server Name, User-Agent

Just as we do for all SSL flows, we pull out the certificates in QUIC from the server. Apparently QUIC also uses a 64-bit cert FLV.1 hash for well known certificate chains (like googles),but we were unable to get our Chrome browser to use them. We always got full certs.

This took a while for me to get the certificate extraction right due to the following issues. 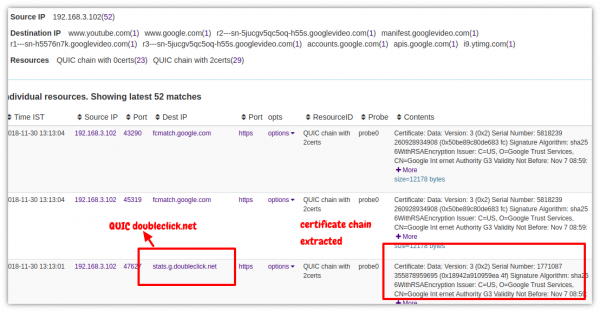 The Trisul scripting API allows you to write in LUA rather than a mix of C/Bro language which need a compilation step. We find this is a major efficiency advantage. Also the BITMAUL protocol analysis framework is fast , safe and covers most common protocol analysis idioms- rather than using C++. Both are great frameworks for network analysis. More choice to the user. x

The goal here is to show the power of the Trisul scripting API rather than a production grade QUIC analyzer.

While the script is working fine in our test environment but putting into production would need some extra work. Particularly when QUIC is used for HD streaming, we need a more efficient way to shunt the stream after the initial handshake otherwise we enter the C→Lua interface for every UDP packet. After the first 3-4 packets QUIC is all encrypted.

Head over to the Github page for the QUIC analyzer to access the scripts. You can download and install Trisul for free and play with this yourself, we have also included a sample PCAP.